Any guest that has visited Walt Disney World knows that being in middle of a Disney experience is stepping into an expansive experience unlike anything else. That’s because, thanks to the creative minds at Walt Disney Imagineering, each addition to Walt Disney Parks and Resorts is like stepping into new stories and themed environments. Each and every environment is planned and executed with intriguing detail along with the most complex levels of immersive storytelling. With a long list of phenomenal themed locations in and around the Walt Disney World Resort area, and one joining that list this summer, when Toy Story Land finally opens, we’re taking a look at some of our favorite detailed locations in Walt Disney World, and the details that make a Disney vacation so phenomenal.

The addition of the Avatar-inspired land at Disney’s Animal Kingdom has brought forth some of the best examples of immersive storytelling, expansive technology and artistry. Stepping into the Valley of Mo’ara on Pandora is a jaw-dropping experience that is fully immersive and alive. The story unfolds through the details of the environment that the Na’vi inhabit, and the wildlife of Pandora is very much alive–many plants react in intriguing new ways after interaction from guests. It’s landmark E-ticket attractions, Flight of Passage, and Na’vi River Journey are some of the most phenomenal examples of theme park entertainment, pushing the boundaries of technology and a spectacularly themed story from start to finish. These accomplishments make Pandora one of the greatest additions to any Disney park, and make us thrilled to see what Imagineering will do next. 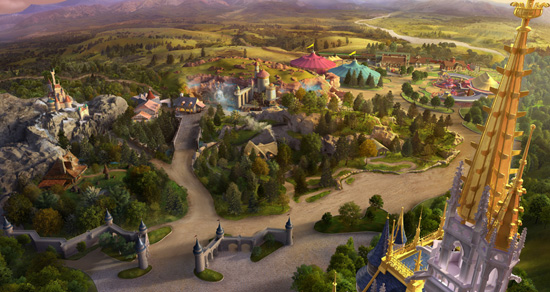 In 2012, Walt Disney World unveiled the latest major expansion to the Magic Kingdom with the addition of New Fantasyland (of course, now only referred to as ‘Fantasyland’, like the rest of the land) and Storybook Circus. These two areas are phenomenal additions to the Magic Kingdom that fully immerse guests inside the storybook worlds of the characters and films that inhabit Fantasyland. From the stunning dining experience of Be Our Guest, the scale and wonder of the thrills behind The Seven Dwarfs Mine Train, or the life-size recreation of Prince Eric’s Castle in Under the Sea- Journey of the Little Mermaid, there’s no shortage of wonder to be found in this expansion.

The World Showcase at Epcot

While this pick is a little more generic than the others, it would be incorrect not to pay proper attention to the incredible detail found in each and every country represented in Epcot’s World Showcase. Each country is given an incredible amount of detail that immerses the guest into the environment and culture of each of its respective countries. From unique architecture, to dining and entertainment, the World Showcase combines the Imagineers’ extensive research and talents to create an experience that’s unlike anything found elsewhere.

The Continents of Disney’s Animal Kingdom

Again, a bit vague, but it would be wrong not to give credit to the grand scope of Disney’s Animal Kingdom for it’s breathtaking beauty found throughout the entirety of the park. Whether it is in the meticulously crafted views of the animals carved into the towering Tree of Life, the carefully planned design of Africa, or the thrilling views of Expedition Everest shadowing Asia, Disney’s Animal Kingdom is created with a whole lot of care and immersive detail that pull you into amazing environments connected with nature and conservation.

Beyond these picks, Walt Disney World is filled with incredible experiences and immersive storytelling that it would be virtually impossible to list them all. Best of all, because of their intricate detail, there’s always new details to find, and new stories to be told throughout the parks. This is part of the reason why Walt Disney World is such an exciting destination to explore and visit again and again. Next time you’re in Walt Disney World, keep your eyes peeled, you’ll never know what stories you might learn when you do!