Fresh off the heels of 2019’s weepie Five Feet Apart, director Justin Baldoni returns for his second feature film and yet-another heartwrenching project with the Disney+ original film, Clouds. The film marks a unique turning point for Disney’s streaming service, diversifying its portfolio of films that will undoubtedly contribute to it emerging as a true rival to Netflix. Chronicling a heartbreaking and beautiful true story, Clouds is Disney+’s bravest, heartwrenching, and most inspiring film yet, one that will lift your spirit and break your heart.

Disney’s latest movie tells the true story of 2012 internet sensation Zach Sobiech, a teenage singer-songwriter who was diagnosed with osteosarcoma at the age of 14 but rose to fame as a result of his inspirational hit songs. His music, created along with his best friend Sammy Brown, garnered the attention of millions with his major hit song, “Clouds” in 2012, fueled by Zach’s never-ending hope and inspiration despite his daily struggles in battling cancer. At the time of the release of his hit single, Zach learned he may only have a few months left to live; however, what followed this tragic diagnosis was a trail of inspiring works from Zach, who hoped to encourage others to live life to the fullest. Zach’s story truly exploded in popularity when it became the feature of a piece by the popular YouTube channel, SoulPancake, who titled their feature on Zach, My Last Days: Meet Zach Sobiech, who showcased Zach’s work and his fight against cancer. Summed up by the real-life Zach Sobiech, and recreated with newcomer Fin Argus’s performance of Zach in the film who says “No one should have to find out they’re dying to start living.” Zach’s work and legacy led to the publication of a book by his mother, Laura Sobiech, titled Fly a Little Higher: How God Answered a Mom’s Small Prayer in a Big Way, which is the basis for this heartwarming film.

The film – which originated as a Warner Bros. title, and was later sold to Disney as a result of the COVID-19 pandemic and the shuttering of movie theaters – is a touching celebration of life in its most beautiful and terrifying moments. At the time we meet Zach in the film, several implied years have passed since his diagnosis, which immediately gives it great strength; Zach already is on chemotherapy and dealing with his daily, ordinary use of crutches since, but the film quickly forgoes tropes and allows the heart of the characters to take shape, allowing us to see Zach for who he is  – an ordinary, trouble-making teenager, and one with big ambitions to pursue his dream of becoming a professional musician.  These dreams are met with challenges, however, when Zach is presented with the heartbreaking news that he may only have mere months left to live. As a result, the film follows Zach’s own struggle with fulfilling his dreams with what little time he has left, and the fear, anxiety, and depression that has arisen as a result. The movie deals with these subjects with maturity on a level perhaps not yet reached on a previous Disney-branded film, and its a great achievement for the Mouse House to tackle complex topics such as this, which are still quite rare on a regular basis (perhaps uncoincidentally, The Fault in Our Stars, a similar film in nature that is now owned by the Mouse, is now streaming on the platform as well).

Zach finds himself in a constant emotional struggle as he attempts to make the most of the time he has left, and in his desire to live life to its absolute fullest. Crippled by the fear of his diagnosis, he struggles with the emotional burden of realizing that he may never live to see his dreams as an artist fulfilled alongside his best friend Sammy, nor will he perhaps see his time lived out with his girlfriend Amy. Like the distressing emotional journey that it is, director Justin Baldoni successfully balances the emotional pendulum swing that it is, ranging from moments of pure beauty and hope to moments of sadness and isolation; both for the Zach and the supporting characters around him. Clouds is a tale of love and community, and how life in its darkest and most frustrating moments often has beauty within it – it’s a testament to kindness and love, and a call to hold those you hold dear a bit closer. Forgoing a wide variety of tropes often used in the genre, Clouds feels deeply personal and therefore, far more powerful. Topics like those explored in Clouds often tread within very delicate waters, and fortunately, absent is the exploitation and romanticization that so many such films on similar topics have crashed and burned in dealing with.

As mentioned, Clouds is a deeply personal film, and that extends to a stellar execution of performance and production. In one of his first major lead roles, actor Fin Argus truly excels in his compelling and impactful performance of Zach, and who truly embodies his kindred spirit that has been such an inspiration and source of hope since his story made waves in 2012. In a performance that could have easily been contrived and perhaps disrespectful out of emotional exploitation, Zach is always beautifully grounded, and even in the most somber and personal moments of the film, we are always given an understanding of the struggles he is facing. Supporting cast members Sabrina Carpenter (of Disney Channel fame) as Zach’s best friend Sammy and is what seems undoubtedly her best and most compelling role yet, along with Madison Iseman (Jumanji) as Zach’s girlfriend Amy, and Tom Everett Scott (That Thing You Do!, La La Land) as Zach’s father really drive home the emotional core of this film and cement it into the beautiful work that it is. Clouds is truly a movie about the celebration of life and love, and these performances help make this story what it is. Elsewhere, Brian Tyler, who has become nothing short of a Hollywood music legend, acts as the score composer for this film, accompanying this story with the musical emotional core of this story. Using the music written by Zach and Sammy as the basis of the film, Tyler builds off the somber melodic tones of the duo and fulfills other moments that truly accompany the lonely, desolate, yet hopeful journey that these characters have endured.

In many ways, Clouds is Disney+’s first step into becoming a serious contender against streaming giants like Netflix or Amazon Prime. To anyone not familiar with the subject matter before viewing, perhaps it can be mistaken for another of the cheesy fodder of previous Disney Channel-esque films – however, within just a few moments it becomes increasingly clear that Clouds is far more indebted to The Fault in Our Stars or Baldoni’s Five Feet Apart that perhaps paved the way to its creation. The film is mature, honest, and brave, and continues on the inspiring legacy that Zach Sobiech left behind.  It’s undoubtedly a gamechanger for Disney+ that will make you laugh, cry, and maybe inspire you to love and live life to the fullest. 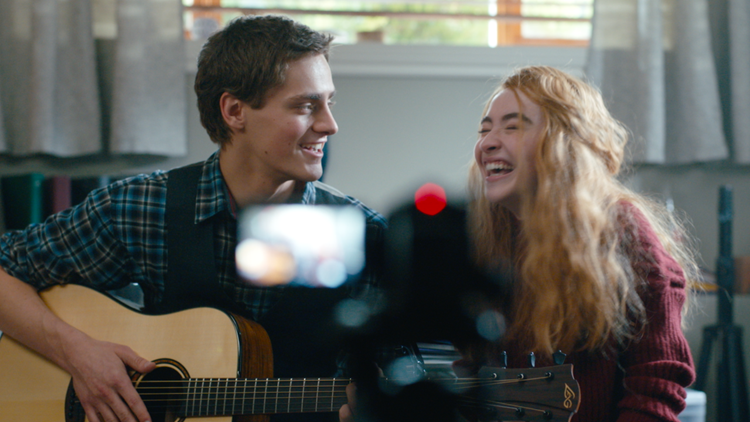